On the opening night of Friday January 25, during the show, Emily Dickinson’s definition of poetry dominated my thoughts about the power of words and the art of performance: “If I feel physically as if the top of myhead were taken off, I know that is poetry.” As a writer of epic theatre, believing in the theatre of ideas and the art of thinking,I absolutely cannot deny profound emotional engagement. I believe the main character, Hester La Negrita, the mother of five multi-racial children, is a different Mother Courage in her own unique way. As she provides and shares food with her children, plays with them and tells them stories, I’m reminded of my observations in Harlem, New York, the streets of Chicago, and real incidents in Cairns Australia and many other places. So often the truth is unseen or misjudged by many people. 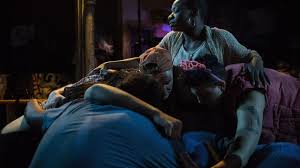 Such a socially responsible play gives me hope and inspires me deeply.  That’s the way I would write plays, I would see the world, I would scream for empathy, I would communicate and I would understand and learn about human conditions.


The show began highlighting the word “Slut” on the wall. Hester’s teenage son, tries hard to wipe it out. A Billy Club which was stolen by one of her sons became a part of Hester’s identity until the end when a pair of high heeled shoes hidden in the corner of the room were revealed as part of her identity as well… A foreshadowing… 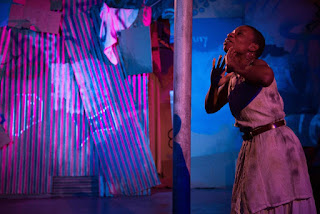 My curiosity was aroused, intellectually and emotionally.

As the play progresses, it gradually introduces the harsh reality of Hester’s illiterate, impoverished life as a single mother. Her expressions of love, sensuality and need for being acknowledged as a human being are explored through scenes with the fathers of her children. The doctor, the preacher, the first love and the ménage à trois with the social worker’s husband. The encounters with the Doctor and the reverend/preacher are the most provocative scenes. That’s where we experience explicitly how certain women are horrendously exploited; and physically and emotionally subjugated. That’s where we learn how the doctor disdains her, takes advantage of her sexually, culminating in the ultimate violation of her womanhood. Robbed of her identity she is left to endure pain through the rest of her life.

The doctor wrote SPAY on a piece of paper and looked at Hester with contempt!  I heard a fairly loud gasp of horror from an audience member behind me!

Amiga Gringa from the same ghetto, who sells her children in order to survive, constantly encourages Hester to do the same thing. She speaks humorously about how everything in capitalism is about consumerism. Everything is for selling and buying and that’s the only way to stay alive!


In the confinement of the intimate space of the theatre, I was “so cold no fire could warm me”.

Bearing the pain through struggling, the high spirited Hester, loses her health and strength, and becomes mentally frustrated and despondent. The marriage dream scene beautifully portrays her fantasies about marriage in which her first love unexpectedly appears. That’s when she wears her high heeled shoes for the first time in her life.  Shoes she hid for a special day!


The play combines provocative dialogue with unique soliloquies, where the fathers of her children and the social worker/welfare lady tell their selfish truths about her and express their own situations. With shattered dreams, when her teenage son questions Hester about being a slut, her hopes are ended. That’s the time the Billy Club is used! 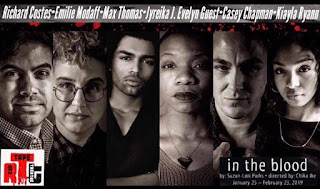 Chika Ike with her deep understanding of the play, is enormously successful in bringing the words into life on an intimate stage where the audience could be a part of the larger experience. The cast, most with double roles, enhanced the drama. Jyreika Guest is enchanting. She acts with a blend of Hester’s different characteristics; courage, strength, motherly expressions, honesty, sensuality, generosity and humor. Her dance like movements and the roughness at the same time make her unforgettable! 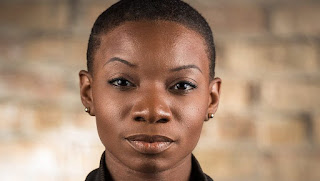 I believe in Red Tape Theatre! I believe in their mission in engaging people in a free exchange of ideas and their offering such socially conscious plays without the financial stress of ticket. I understand the need for such theatre from the core of my being!

Thanks to the entire crew.

Posted by Ezzat Goushegir at 7:51 PM No comments: