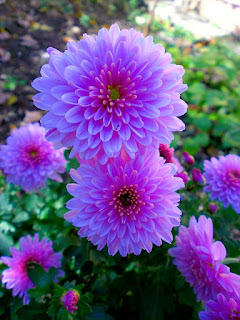 The Wild Flower's Song by William Blake
As I wandered the forest,
The green leaves among,
I heard a Wild Flower
Singing a song.

'I slept in the earth
In the silent night,
I murmured my fears
And I felt delight.

'In the morning I went
As rosy as morn,
To seek for new joy;
But oh! met with scorn.'
Posted by Ezzat Goushegir at 2:43 PM No comments:

All Quiet on the Western Front at Greenhouse Theatre Center, Chicago

“ON THE WALL WAS CHALKED:
They want war.
The man who wrote it
Has already fallen.

From A German War Primer by Bertolt Brecht

With the rise of totalitarianism in the world; Erich Maria Remarque's 1928 renowned anti-war novel All Quiet on the Western Front, motivates Matt Foss, playwright and director, to reintroduce the notion of brutality of war in order to challenge the audience to rethink what would lead inexperienced youth to enlist into a new world war. The book was banned and burned in Germany during the rise of the Nazi Party. Now, we are witnessing new signs of nationalistic censorship growing in different societies. 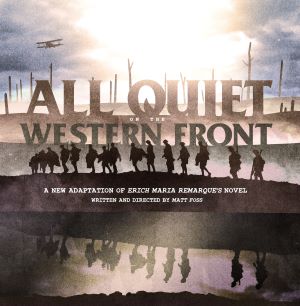 Having lived through an eight-year war; assisting wounded soldiers and villagers in a war zone where an uncalculated/accidental movement could be a matter of life and death; the play evoked dark memories that war is nothing but destruction and death. Despite the play’s demonstration that war causes permanent physical and mental trauma, increases vulnerability to terror and savagery in all forms; it deepens your understanding of politics, increases your empathy and strengthens your ability to see through how the warmongers behind the scenes create and precipitate wars. 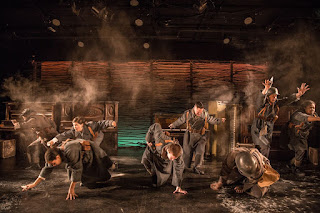 Matt Foss’s adaptation is superbly theatrical with cinematic elements under his brilliant directing. With a collaboration between Red Tape Theatre and Greenhouse Theatre Center, the performance is a polished work of art in all its different elements. The stage is spacious with elegant symmetrical lights, the beautiful, uncluttered setting of wires upstage and several pianos which were used brilliantly as scenes shifted in synchronization with the sound of explosions, bombs, and combats.  Those were also used simply to break the total silence…or to emit a painful moan during knife strikes…Each scene dissolves and transforms into another scene smoothly and uninterruptedly. 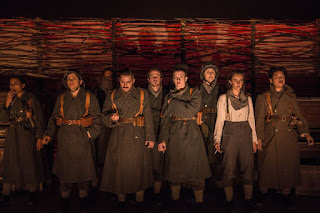 The play starts with the mixture of narration and performance, physical actions, choreography, movements, atmospheric images, in harmony with artistic use of music, hymns, rapid change of lights, sound effects, voice overs and effective silences with tic tocs marking time. All these theatrical elements worked well with some experimentation of German cabaret style and modern music and dance as a vital form of entertainment. 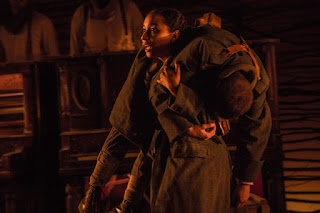 The intimate collaboration between director, actors, set designer, sound designer and composer, light designer, costume designer and choreographer, give the impression that the outcome of the process was the clear result of a skilled directing, techniques, discipline, cooperation, pure love, and hard work. The choice of multi-racial and gender ensemble gives the actors comfort and confidence to be completely connected, cooperative and present on the stage.  All the actors, equally, put their heart into their multi roles and performed magnificently. Elena Victoria Feliz as Paul, the narrator, was pensive, meditative and poetic. One of the unforgettable scenes was when Paul was granted leave to go back home to see his mother. The train, the sharp light as the sun, the encounter with his mother and sister, and the bar scene where his alienation with the absurdity of war was exceeded by the patriotic absurdity of the townspeople. This scene is one of the greatest scenes in this play. 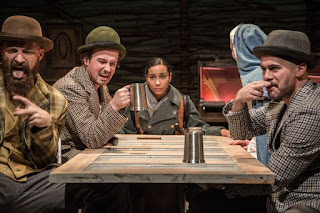 All Quiet on the Western Front is highly recommended.

All tickets are FREE as part of the Free Theatre Movement.

All Performances at the GREENHOUSE THEATRE CENTER, 2257 N Lincoln Ave

Posted by Ezzat Goushegir at 8:16 PM No comments:

A Review on some books

My review of several books published in a weekly online magazine: Shahrgon . The first part is on Joan Nahid's book.
Posted by Ezzat Goushegir at 3:09 PM No comments:

The Courage to be yourself

“To be nobody-but-yourself — in a world which is doing its best, night and day, to make you everybody else — means to fight the hardest battle which any human being can fight.”

Posted by Ezzat Goushegir at 3:03 PM No comments:

The Drugging of the American Boy

Very important points in this essay published in esquire.com :

New post
Posted by Ezzat Goushegir at 9:34 AM No comments: