A production of Red Tape Theatre 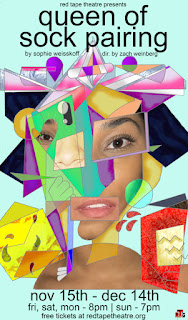 “Queen of Sock Pairing” immediately brought to my mind Charles Bukowski's poems and one in particular: Bluebird. A poem which describes Celia, the main character’s emotions; her fragility and vulnerability in a brutally rough and challenging situation. That’s how she creates a double of herself like Bukowski's Blue Bird. The theme of dualism, having a dual nature, continues further in other characters such as Cai and Walden as resemblance of the other self.

The opening scene invites the audience into a chaotic atmosphere in the age of digital estrangement. The story gradually portrays a fragmented world in which the characters, communicate in a strange way.  In this environment, Celia, inseparable from her double as an internal conscious voice, works in an emotionally fractured house, where she continues to see her nihilist boyfriend Cai. The only bond between Celia and Cai is their sexual relationship, where he interacts with her, physically and emotionally, through his pessimistic, purposeless ideas. Devastated by her situation, she tries to collect herself, deal with all the contradictions and conflicts and act strongly with Joan, Cai, Walden and Jonathan. One of the solutions is the concept of role-playing and alienation. 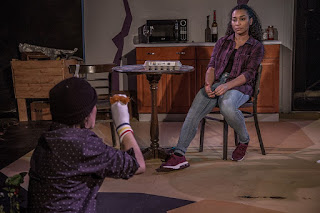 Celia uses the concept of role-playing in this play to alienate herself from her current situation and portrays both sides of the power divide. As Celia plays the role of Joan; Cai plays the role of Jonathan and Walden plays both the imaginary double and Walden, himself. In the process of the game, they gradually estrange themselves from their true selves and change into imaginary roles to fulfill the desire of empowerment. The usage of dualism and role-playing remind us of the concept of the character and its double which have been  defined in Antonin Artaud's and Jorge Luis Borges' literary works widely.
Celia’s relationship with Joan as her boss has also a tinge of Jean Genet’s play “TheMaid” as well as Marie Ndiaye’s play “Hilda”.

Although some of the audience members could not see the rooms in corners well enough, the setting fits the soul of  the play beautifully. The pace and the rhythm are slow in comparison with its reading.  Yet silences and pauses work well in combination with a faster speed, dynamism and energy of the scenes. 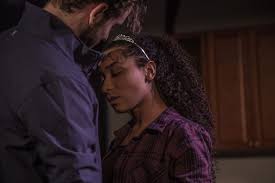 All actors are superbly engaged in their roles and role-playing. Elena Victoria Feliz is captivating as Celia, as well as Aaron Latterell as Cai, Brenda Scott Wlazlo as Joan and Scot West as Walden/Jonathan. In the effective scenes when Walden plays clarinet and later creates chaotic noise, Scot West conveys the roles powerfully.

While Sophie Weisskoff's Queen of Sock Pairing is a multi-layered play with thought-provoking concept, Zach Weinberg's artistic directing brings out its hidden colors and complexity where he  intelligently presents the essence of it to the public.

The Madness of Edgar Allan Poe 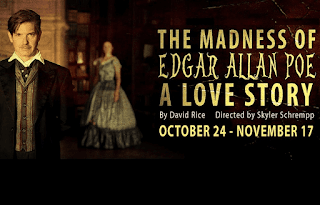 Yesterday I had the opportunity to see the last performance of “The Madness of Edgar Allan Poe: A Love Story”; a memorable production with poignant and melancholic yet witty concept! Mesmerized by the haunting opening scene with "The Bells", crafted with the use of effective sounds, in an atmospheric space, I was immersed completely into the world of the poet I respect since my teenage years!  The repetition of words, the alliteration and onomatopoeia, the musical imagery, the rhythm of the night, the repeated chiming of the bells throughout the scene, created melodious rhythm, mood and narrative where they all build up a profound, distinct engaging atmosphere. 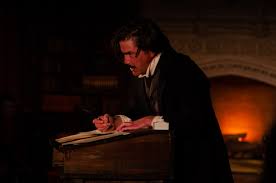 With creative use of space in Historic Cheney Mansion, actors led the audience members in a journey from room to room, and floor to floor to experience Poe’s evocative/complex stories of fear, horror and love.  Each room emphasizes the experience of a story by Poe on the essence of imprisonment, religious fundamentalism, sickness, murder and love, from “The Telltale Heart” to “The Pit and the Pendulum”.  The essence of each scene shows the unique collaboration between the playwright, director, actors in relation with the space. The scenes are also reminiscent of stories by Dostoevsky, Kafka, Fernando Pessoa and George Bushner.

The method of using space, reminded me of Anne Bogart’s workshops on acting technique, directing and engaging experiences. It was fascinatingly reminiscent to see how the actors in in this show, used their body in time and space to create a meaningful experience.

All six scenes are enormously memorable. In addition to the theatrical elements, the use of light, sound, setting, music and poetic imagery in scenes such as Virginia in the specious tea room, the prisoner, the murder of the old man, and the presence of "Ligeia", specify a creative approach to poetic cinema such as Jean Cocteau’s! 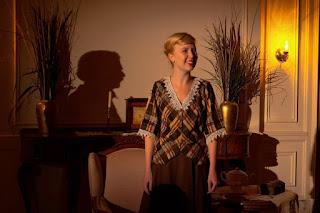 Actors; especially Christian Gray as Poe and Erica Bittner as his wife Virginia were sensational with their superb acting and singularities. Not to forget to mention the presence of Kevin Tre’Von Patterson as the witty Fortunato/Monk…