We Are Pussy Riot in Chicago

I have seen
The old gods go
And the new gods come.

Day by day
And year by year
The idols fall
And the idols rise.

Today
I worship the hammer. 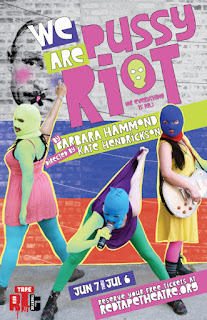 We Are Pussy Riot or(everything is PR), a factual portrayal of “Pussy Riot” the Russian political activist group, is in its second week of performances at Red Tape Theatre. This Highly theatrical and informative play, performed in didactic style and guerrilla performances form, challenges the audience members with an intentional *hammer to encourage thinking instead of letting them sit back and be immersed in emotions of the story.

In an anarchic and chaotic opening scene, with a striking 1984 George Orwellian setting, the three punk rock characters, Nadya, Katya and Masha re-enact an anti-establishment and anti-patriarchal religion act, while singing in loud, fast-paced songs accompanied by electric guitars, sharp-edged movements and short dialogue. Influenced by the Riot Grrrl Movement, the young members of the Pussy Riot group try to express their protest on crucial subjects such as: growing inequalities, social injustice, poverty, corruption, bureaucracy, dictatorship and the absence of true democracy. Their anarchism and propaganda gestures are their only instrument to protest against the authorities and challenge the lethargic societies, aiming to awaken the public to see glimpses of realities, challenging them to think, to act and react.

The satirical language combined with serious narration by Sergei, a professor of history gives the play a tinge of docudrama which brings to mind a quick glimpse of “La Commune” by prominent filmmaker Peter Watkins.

Kate Hendrickson, the director brought together a stylistic direction fitted with the nature of the play.The artistic use of theatrical elements such as shadow puppetry, various physical actions, invasion of bodies and lands, rape and giving birth scenes, work beautifully conveying the thoughts behind the play on the essence of patriarchy and tyranny. Some scenes reflect Chaplin’s the Great Dictator and others Federico Fellini’s Satyricon where male authorities repeatedly and metaphorically come out of the women’s wombs.

The real Pussy Riot group considers itself a part of the global anti-capitalist movement, and their focus is more on global economic inequality, women’s rights, LGBT rights and Trotskyist’s theory of permanent revolution. My personal hope in the play was to see deeper aspects of their activism to broaden the audiences’ perspective on broader issues. Their outrage about imperial politics, their belief in radical feminism and economic equality which bring crucial subjects to light and make the audience think globally towards the world we live in.

A true theatre encourages conversations among the audience as well as the actors, directors and playwrights. It inspires them to do a deeper research on the truth and experience the essence of actual process and tangible experience. This show truly does so.

I was immensely impressed with the actors’ artistic talents and devotion to the show. Casey Chapman as Vladimir Putin is outstanding, resilient and realistic. Emily Nichelson, Stephanie Shum, Anne Sovenneville  Emilie Modaff and William Rose II, truly shine on the stage. Their performances range from great vocal presence, body movements to the energy and insight to engage with the audience. The production shows a strong collaboration and sincerity behind the scene and the ending is spectacular when the actors introduce themselves....

I highly recommend it.

*Bertolt Brecht: “Art is not a mirror to reflect the world, but a hammer with which to shape it.”