Ingrid Bergman gives a virtuoso solo performance in this Jean Cocteau one-act. The plot of thishour-long piece is a simple one: a woman, devastated after her lover leaves her for someone else, speaks to him on the phone one last time. The piece is beautifully, perfectly written and performed--all of the little lies and desperate hopes of heartbreak are captured. Bergman's performance is as brave as it is complex--she is willing to let her character crumble into an embarrassing weakness that few actresses would risk. Anyone who has ever nursed false hopes of salvaging a relationship will find this piece all too well done. See it, but not right after a breakup.
Posted by Ezzat Goushegir at 9:42 PM No comments: 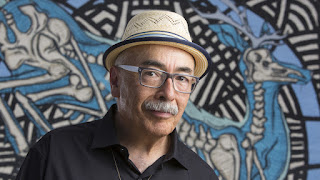 Juan Felipe Herrera, the first Latino to be U.S. poet laureate, is a master of many poetic forms. When I was student at the University of Iowa, I had an experimental writing class with him.  He published one of my poems in an anthology.  It was truly an honor! He then gave me a cassette of Parisa's songs as a gift! Congratulations, Juan Felipe!
Posted by Ezzat Goushegir at 12:25 PM No comments:

‘My Enemy, My Brother’


In this short documentary, two survivors of a brutal war in the Middle East meet again years later under astonishing circumstances.
Posted by Ezzat Goushegir at 12:50 AM No comments: 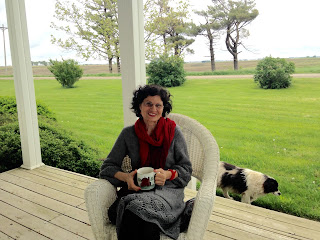 After many years, I visited Iowa, my second birthplace! This time in a farm belonged to my friend from the south- west of Iowa. Acres after acres, the field was covered with green grass, newly planted corn and soy beans. It was an illuminating experience, learning about American pioneers, family structures, communities,  churches, schools,  farming, towns with less than 3000 populations, animals, horses, birds, darkness, silence and sounds…The sound of nature, the sound of rain, wind, mooing black Angus cows, swallows, Baltimore Orioles, Red-winged Blackbirds …and the trains from faraway… All the sounds and rhythms of nature reminded me of Lady Chatterley, the French film directed by Pascale Ferran…and D.H. Lawrence’s poetic observation…
Peonies, pink and fragrant, freshly grown on the cemetery, around my friends’ great grandmothers’ grave, great grandfathers’ and relatives’ invited me to their loving world, speaking with me silently….  And Sweeper, the old dog, my faithful companion --to my surprise-- guarded me all night behind the window. My eyes were closed, but I could hear his heavy breathing… and the black cat, Einstein…aloof and distant was on the porch, ignoring everything …
On Monday as I was walking alone on the field, my presence frightened the cows! They ran from one side of the field to the other…Looking into my eyes aggressively, mooing loud as if they were crying for help! The cattle from the far north mooed in harmony with them, ran quickly towards them, as if they their territory was in danger… My friend laughed hard…I said: you see! Even the cows would perceive me differently! Like a foreigner! Am I a foreigner!? 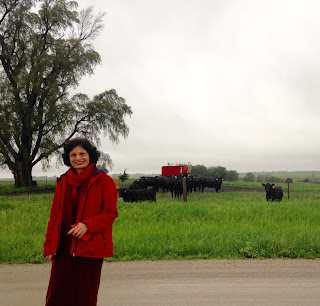 It was enormously encouraging to see great quotes from writers and poets in the resting area at Tiffin, seven miles west of Iowa City, instead of advertising. Quotes from Writers such as Kurt Vonnegut, Tennessee Williams, Jane Smiley, Marvin Bell, Paul Engle, John Irving and….who were graduated from Writers Workshop or taught at the University of Iowa.  One of the passages comes from Ames-born U.S. Poet Laureate Ted Kooser; it reads: “There’s no money in poetry because most of my neighbors, and most of yours, don’t have any use for it." And the other from Tennessee Williams: "Death is one moment, and life is so many of them." 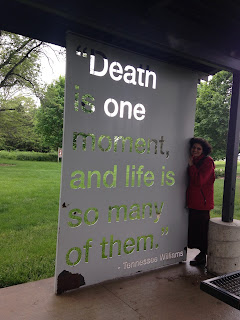 There was a city called Adel;  a city with the population of 3,682. Adel is part of the Des Moines area. 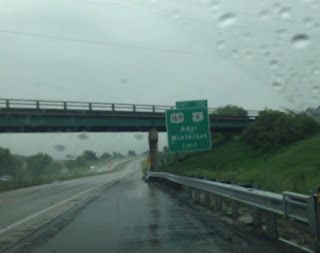 In one of the malls in Iowa City, this Mary-go-round took me to the year of  1989, while writing my first play "Metamorphosis" in English... 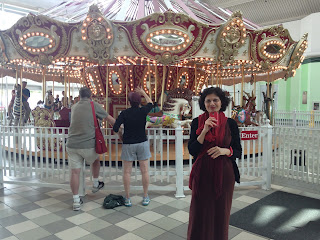 many years
Posted by Ezzat Goushegir at 9:42 PM No comments: