History of Masks - Ancient Use of Masks

"Masks have served an important role as a means of discipline and have been used to admonish. Common in China, Africa, Oceania, and North America, admonitory masks usually completely cover the features of the wearer. Some African peoples hold that the first mask to be used was an admonitory one. In one version of the mask origin, a child, repeatedly told not to, persisted in following its mother to fetch water. To frighten and discipline the child, the mother painted a hideous face on the bottom of her water gourd. Another version is that the mask was invented by a secret society to escape recognition while punishing marauders. In New Britain, an island of Papua New Guinea, members of a secret terrorist society called the Dukduk appear in monstrous five-foot masks to police, to judge, and to execute offenders. Aggressive supernatural spirits of an almost demonic nature are represented by these masks, which are constructed from a variety of materials, usually including tapa, or bark cloth, and the pith of certain reeds. These materials are painted in brilliant colours, with brick red and acid green predominating." 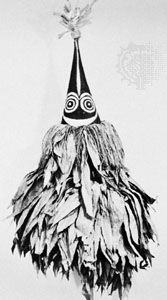 Posted by Ezzat Goushegir at 12:58 PM