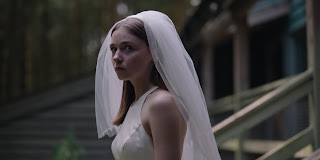 A fascination, touching film series picturing teenage lives, living in our brutally lonely world, dealing with devastation, loneliness, emotional deprivation and meaninglessness of life in the time of a new great economic depression. The film has a touch of Bonnie and Clyde, Vagabond directed by Agnès Varda and some other films...

Some more facts on real Bonnie and Clyde...

"One of the skills of this show is its light touch when it comes to humour, which arrives unexpectedly, in the bleakest of moments. The writing is fantastically dry – even a line as stark as “I killed someone” earns a laugh, through the addition of a pause, and the explanatory addition of “on purpose”."

" Like the first series, this inhabits a highly stylised world that is not fixed in any time or place. It feels a little American, a little English, a bit 70s, a bit 90s. The cars and buildings are both glamorous and gloomy, much like the show itself."
Read more...
Read more about Charles Forsman the creator of the graphic book...
Posted by Ezzat Goushegir at 2:17 PM